One of my students is currently grappling with a mini thesis on Hitler’s Foreign Policy from 1935 to 1939.In particular he is concerned with the role of Nazi Ideology in the determination of that policy. It has been a real journey for the lad, painful at times but progress we make. Not the least of his problems was simply having an idea of the political map of Europe at the time, even where countries are on it! Sooner rather than later we savaged the title of his thesis. For example, and pertinent here, the need to understand that this is about Germany and it’s relationships with other states…not only at this time but as they had evolved over time. Interesting to note here that as a Geography A-Level student he was surprised to discover that where Germany IS in the World may be of critical import rather than the transient tiller touching of a particular leader. As such Adolph Hitler, not even a North German as it were, was operating in this policy area with the same ‘picture’ as Bismarck, Bulow, Bethmann-Hollweg, Stresemann et al who went before him. Much beloved of those embarking on Commercial Pilot Written Exams are the two Navigation Papers & in particular a tricky, even nasty, calculation known as the HOWGOZIT. ( Do Google the Howgozit Curve.) You can as a pilot undertake all the planning pre-flight you like ahead of a trip. You know, Met. Reports, the Winds Aloft, Weight of Aircraft, Fuel Load & Burn Rate, and so on. However, what it is to calculate, say, one third of the way along the route, your actual performance. From there you can give a more accurate ETA or even see that you will need to divert, stop to upload more fuel. My History student had little or no sense of the GERMAN HOWGOZIT at the outset and rectifying that has been key. The German Flight, in a sense, started in 1871 and where it was in 1935 represents a point down the track.

Churchill’s 1939 comment about the tricky business of ‘reading’ Stalin’s or Soviet Foreign Policy has dogged me all week in the wilds of North Warwickshire. A riddle wrapped in an enigma or some such was his opinion. Less well known is his next remark. The key, he felt, perhaps lay in an understanding of Russian National Interest. One can argue that this was lost to view post 1945. Russia’s Geographical position and where it was on it’s journey in time, the Howgozit, was more relevant than Communist Ideology or Stalin’s paranoia. Examining pre-flight plans of the Hitler’s, Stalin’s of the World not very productive let alone ideological templates. My student has been something of a rabbit trapped in the headlights with all this. Not least when asked to teach me,’at the whiteboard’. He grapples well and will continue to do so in his climb to cruising altitude….

The picture is of The rear facing Navigator’ 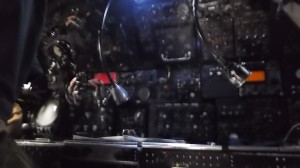 s table in a Vulcan. Wonder why his position is looking backwards?