Sir Ralph Hopton & Sir William Waller, who commanded the Royalist and Parliamentary forces respectively in this Civil War action, were old acquaintances. Indeed they had fought side by side as mercenaries in Europe. As men of practical military experience they found themselves in positions of responsibility yet on opposing sides when it came to politics and their consciences. The former had established a reputation for conducting rearguard actions with beaten troops…the latter earned the nickname, ‘night owl’, for his skill in moving troops in the hours of darkness. That there was a battle at Cheriton at all was due to Waller’s ability to move the London Trained Bands overnight from direction East Meon, hoping to take Old Alresford astride Royalist communications between Winchester and Basing House. Hopton’s forces, in the field from Winchester, were nearly caught out but his advanced guard raced into Alresford before Waller’s men could reach it. So that gave the night of 28th March for both to contemplate the ‘morrow and a battle neither much desired and certainly not with a friend. Suffice to say it went badly for the King’s men and Hopton had to fight a rearguard action. Both commanders deployed their respective particular talents…no doubt they recognized and applauded same.

Shuffle on some 350 years and 15 year old boys are in those same fields on a hot June afternoon for a bit of Ordnance Survey assisted re-enactment. Armed with packed lunches and pop rather than pike or musket, two ‘sides’ of c. 30 each were deployed. The Royalists to Alresford the Parliamentarians to Hinton Ampner House. The Author, knowing Waller’s Ridge like the back of his hand & not wishing to get all hot and bothered running round the battle arena. took his men down to the ‘Ridge in good order/time to await the arrival of the Royalists from Alresford. In this I was able to count on the tactical nous/sparkling wit & repartie of a venerable colleague…let us call him Dick. Distributing our ‘men’ in penny packets along the ridge we, as ‘staff’ you understand, settled down in a leafy bower on the left flank with two senior boys to act as runners. It was very hot. About an hour later the ‘Royalists’ hove into view some two miles away. Noisily they came down into the vale below our position & began to advance towards us. ALL accounts agree that the King’s men tried to force a way round our right flank. This was what was expected. We, for Parliament,  had set our strength accordingly. Bear in mind, too, that raising binoculars was about our most strenuous activity of the afternoon thus far.

Shock, Horror!! One of the teachers i/c Royalist forces had decided to advance against our thinly held left. Steadily they came on up a leafy, hedge-lined lane quite contrary to what happened in 1644 & with our ‘men’ in 1994 up to a mile away along the ridge. Outnumbered about five to one it was not looking good. The two senior boys ‘with us Staff’ were decidedly unhinged. Now in this situation, as in life, tight corners are when you find out who your friends are and where real education takes place!! The aforementioned Dick took charge. Enjoining us to keep perfectly still/quiet he said, ‘Leave this to me’. The Royalist ‘men’ were by now on the ridge path and moving along it unhindered. We crouched low as Dick burst forth from our hide and told the teacher and his ‘men’ to stop where they were. ” Dr.C., what do you think you are doing? This is not where you are supposed to be”. Mumbled apologies followed, even an attempt to justify a novel approach march. Dick was having none of it. “You will have to go back the way you came and go up a track on the other side of the vale as per map you were given.” And off they went, mutterings about thirst audible in the ranks. I had to bite on a thick twig to stop laughing, 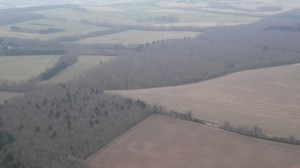 tears ran freely. One of the two senior boys said he could not believe it. We toasted the 2 i/c with Coca-cola as I recall, watched the ‘foe’ struggling down the lane and then set off to witness further Royalist discomfort at the other end of the ridge. Along the way it was pointed out that the Parliamentary waggon train had better be well stocked with alcohol. One of the boys wondered if this was quite ‘cricket’ which was put down with a never to be forgotten,”This is war”.

Either you have character/style/ charisma or you do not. Hopton, Waller & Dick clearly did. The senior boys made of it what they will, the rest of the ‘men’ had their own experiences. My friend that day was ever thus and will always be with me.