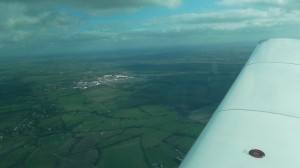 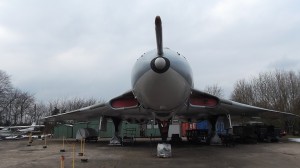 Kate Metcalfe has recently joined Orange Group, a forensic auditing outfit based in Twickenham & Kenilworth. Marketing their prowess in the Construction Industry will be a challenge & hearing some new jargon ‘at home’ prompted the thought that nowhere, arguably, has there been a greater need for an independent toothbrush to be taken to every corner of the Augean Stables than Defence Expenditure. Probably that has always been so, as I am sure Cardwell would agree, but certainly the chequered history of public money frittering since 1945 bears scrutiny. The Public Accounts Committee has battled in vain on behalf of various Governments in this area…to little avail.

The two pictures are reminders of past doings in this area. They happen to be of an aircraft and a place which are linked, not only to the Cold War era but to each other. The airfield was the former RAF Gaydon, the latter an Avro Vulcan…a team of volunteers lovingly cares for this V-bomber such that it manages high speed taxi runs each year. The noise generated considerably dwarfs  that of the Jaguars/Landrovers/Aston Martins which strut their stuff up Gaydon’s old main runway. In former times this RAF station trained Navigators and before that was the home of the Vickers Valiant….another V-bomber.

Indeed there were three such bombers which came out of a MOD requirement specified in the immediate aftermath of WW2. The third was the Handley Page Victor. The need was to provide a delivery system for the UK’s Independent Nuclear Deterrent & three companies with great traditions in the industry provided designs. The fact that improved Soviet air defences made their mission extremely difficult at the altitudes/speeds all three could achieve by the time they came into service is as academic as the switch to a submarine delivery system. ( clearly not ‘academic’ in every sense as Polaris survives…the ‘independence’ one could debate but not here.) The fact is that, despite tests clearly demonstrating relative weaknesses in performance/capability, let alone clear duplication in general terms, the Government of the day in a noble desire to support all.three private companies (& their design teams) placed orders for all three aircraft. One Vulcan still flies, one even made it to the Falklands with the help of a few Victor tankers & one Vulcan still roars up the runway at Wellesbourne. That roar must be audible at Gaydon where the Valiants were axed after a very limited Service life due to structural fatigue issues.

What drove the ordering process? Sentiment? Was this the most efficient allocation of public monies? Hindsight is a wonderful ‘thing’.but it is surely incumbent on responsible Government officials to allocate scarce resources as efficiently as possible. One could cite many other examples in the Defence sector, such as Tanks & even army boots, and it is true the whole area is blighted by inter-Service rivalry. Yet as thoughts turned to Orange Group’s skill sets & the notable ongoing job they are doing at Terminal 5…or is it 6….lost count of how many quarts are being jammed in that pint pot…one wonders how well spending is being monitored in the construction of the nuclear aircraft carriers. Chronic overspending has invariably attended major defence contracts and this really does need ‘independent’ auditing/monitoring on an on-going basis.

Human beings are fallible. Defence procurement will suffer with the best will in the world. Do the errors need to be magnified by inadequate scrutiny of money trails. Someone, like an Orange Group needs to think outside the box and be pro-active…before our newspapers are filled with horror stories surrounding those ‘carriers.