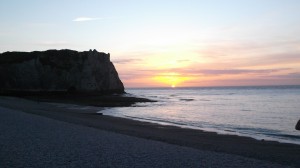 Great to hear from a couple of A/S students today regarding their results & plans for the year ahead. This coincided with the BBC News Channel interfering with the important business of toast & marmalade consumption earlier in the morning. Watching yet another politician trying to avoid stating the obvious, ie., that thousands of school leavers entering Tertiary Education is one of the neatest fixes of Unemployment figures yet concocted, nearly ruined that all important first cuppa of the day. Not quite. With many degrees devalued, along with the public exam results which underpin the whole edifice, one is prompted to consider the virtue of simply going out to work. A wise person once said that by the time you are 25 your qualities will count, not your qualifications. Given that, ‘pound for pound’, mature students make the most of a University environment why not take the path less taken. Avoid GAP like the plague, earn a living for a while & then take stock. This is pertinent because increasingly the question is being asked as to whether a false God is being chased at c.18 …not to mention the wisdom of building up large debts so early in life. It is doubtful that the supposed increase in earning capacity to be had from acquiring a degree will readily enable the clearing of that debt in any case!

In short, the results gained today will be less important than it seems, be they good or bad. The postcard from a past student who did badly(?) at A-Level & took a pearl of wisdom by going on a sheep farm in Australia for a year is salutary. ’The most important decision I ever made’.